Back to all posts

The Marvin Hagler vs. Roberto Duran contest was a professional boxing fight which took place on November 10, 1983, at the Caesar's Palace hotel in Las Vegas, Nevada. It was for Hagler's universally recognized (or undisputed) IBF, WBA and WBC world Middleweight title. Having knocked out Davey Moore in eight rounds on the previous June 16th to win his third divisional world championship, the WBA world Junior Middleweight one, Duran, a Panamanian, was attempting to become the first four division world champion in boxing history. Hagler, meanwhile, had beaten Alan Minter by third round technical knockout in September of 1980 to win the undisputed world Middleweight title, and, after proposed "super-fight" title defenses against Sugar Ray Leonard and Thomas Hearns failed to take place, was making the eighth defense of that championship, his seven previous defenses all ending in knockout wins for the American champion. 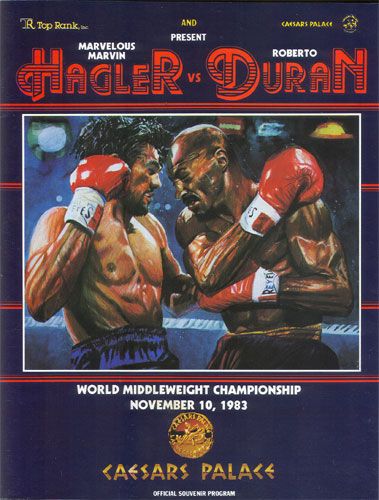